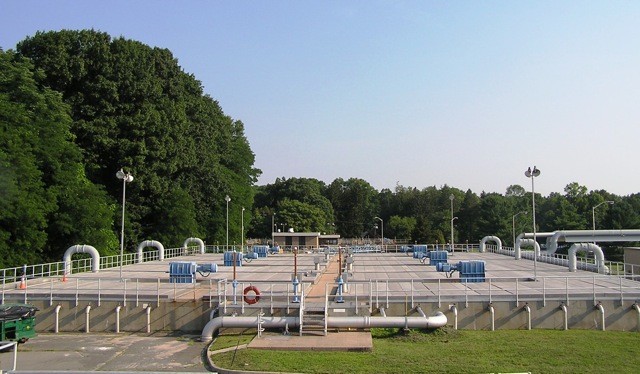 There are two Modified Aeration (MA) tanks consisting of three stages per tank. Each stage is equipped with a mechanical surface aerator. This is the first of the two biological/activated sludge processes. In this process approximately 60% of the organic material (BOD) is removed.

The effluent from the Grit Chambers combined with the return sludge from the MA Settling Tanks flows to the MA Tanks. The combined flow is referred to as “mixed liquor”. Oxygen is driven into the mixed liquor via mechanical surface aerators to maintain an aerobic environment for the biological process/treatment to occur while mixing to maintain solids in suspension and to ensure intimate contact between the activated sludge particles and the incoming wastewater. Microorganisms in the return sludge are constantly being recycled back to the head of the MA Tanks. The “food” for the microorganisms is the organic matter in the influent wastewater.

The goal of this process is for the microorganisms to convert the non-settleable solids into settleable solids. The mixed liquor from the MA Tanks flows to the MA Settling Tanks by gravity.Odor Control: The MA Tanks are covered with aluminum panels for odor control. The headspace under the covers is vented (via centrifugal fans) to four biofilters. The biofilters are concrete structures (approximately 40 feet long by 25 feet wide and 4 feet deep) that contain a media bed consisting of mulch, wood chips, and leaf compost. The odorous air from under the MA Tank covers is vented up through the bottom of the biofilter media and the bacteria living within the media remove/consume the odorous compounds in the air stream. The biofilters are open to the atmosphere and the air that leaves the biofilter is virtually free of odor producing compounds.